It was a year of protests and violence in every corner of the world, and of political battles and campus unrest — a year marred by the murders of Dr. Martin Luther King, Jr., and Robert Kennedy, and the year that Richard M. Nixon was elected to serve as our 37th president. 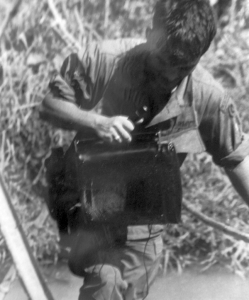 John Mack Flanagan, with a 45 on his hip and a portable tape recorder in his hand

Not all of that half-million-strong force was there “in country” for armed combat, however. A small group performed a different military duty: providing entertainment on radio and television for their brothers and sisters in uniform.

At the next Broadcast Legends quarterly luncheon, these three will be on hand to tell their stories.

The event, entitled “Something Happening Here: Vietnam On The Air,” takes place on Thursday, March 15, at the Basque Cultural Center in South San Francisco, beginning at 11:30 AM.

John Mack Flanagan, recently inducted into the Bay Area Radio Hall of Fame and perhaps best known for his popular run on 610/KFRC in the 1970s, when it was named Billboard magazine’s Station of the Year an unprecedented four times, worked a daily shift on the Armed Forces Vietnam Network (AFVN) in 1968. 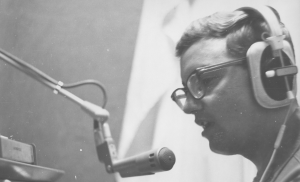 Dan Ethen at the AFVN microphone

John’s military assignment had him playing requests on a noontime program called “It’s What’s Happening,” and anchoring a sports report each evening on AFVN-TV, working from the net’s studio in Da Nang.

The radio landscape in Vietnam was one quite familiar to Dan Ethen, also a recent BARHOF inductee. Dan, who is currently Senior Engineering Manager with the K-Love and Air1 radio networks, spent time “in country” during 1967 and 1968 as SP5 Daniel F. Ethen, USA, helping to build the transmitter plants at AFVN headquarters in Saigon, and “up country” in Pleiku.

(That’s Dan in the AFVN “Mobile Unit” in the photo across the top of this article.) 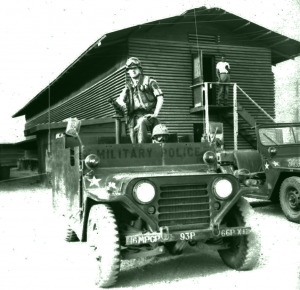 Michael Bennett with the Military Police in Vietnam

Michael Bennett, who has had a long and distinguished career in broadcasting here in the Bay Area, didn’t get behind the microphone in the Army — he served with the 127th MP Company in Qui Nhon and the 66th MP Company in Phu Tai, which was in charge of POW compounds, performed convey escorts, and operated as infantry during the Tet Offensive in the Spring of 1968.

Upon his return to civilian life, Michael attended the College of San Mateo on the broadcasting track, which led to a career in radio and voice acting that has spanned five decades.

Make your reservation to join the Broadcast Legends for this special event as we look back on the unique experiences of these men from a contemporary perspective.

This entry was posted in Broadcast Legends, Legends Events, Legends People and tagged in legends lunch.

« The Legends Summer Luncheon: TV News: Then, Now and Future
The 2017 Broadcast Legends Holiday Bash at the Basque! »
View more posts from this author